The Kosovar Goverment Ad in Serbia 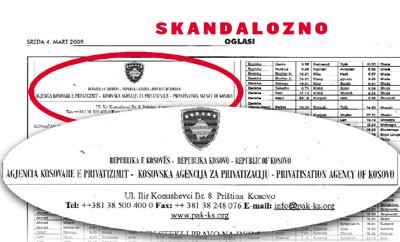 Probably one of the biggest gaffes ever in the Serbian media: the mainstream Serbian daily newspaper, Blic, has accepted a full-page advertisment from the break-away state of Kosovo. Serbia disbutes the right of Kosovo to secede from Serbia. It not only unlawful but also not very patriotic to make business with the government of Kosovo in Belgrade. Blic has gained 2590 euros on list price for the advertisment, now it faces a nationalist boycott in Serbia.

This is of course hypocrisy. I think the last thing those Serbian politicians who cry foul want is a return of Kosovars to the voting station and elect MPs in the Serb Parliament.